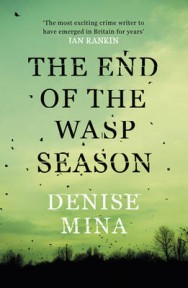 Home > Fiction from Scotland > The End of the Wasp Season

The End of the Wasp Season

A savage murder with no apparent motive – DS Morrow’s most challenging case brings her work and home lives dangerously close…Winner of the prestigious Theakstons Old Peculier Crime Novel of the Year Award. When wealthy Sarah Erroll dies a violent death at her home in a posh part of Glasgow, the local community is stunned by what appears to be a truly gratuitous act. Heavily pregnant with desperately wanted twins, DS Alex Morrow is called in to investigate and soon discovers that there is more to Sarah’s murder than it first seems. On the other side of town, Thomas Anderson is called into the headmaster’s office at his boarding school to be told that his tyrannical father – a banker responsible for the loss of many livelihoods in the recession – has committed suicide by hanging himself from the old oak tree on the lawn of their home. Thomas returns to the family home to find his mother and sister in a state of numb shock. The head of the household is dead, yet their initial reaction is not that of grief, but relief.As Alex Morrow slowly unravels the connections between the two cases, she faces her greatest challenge yet as her work and home lives collide with potentially disastrous consequences.

Reviews of The End of the Wasp Season

A literary West Lothian question: why do Scottish writers dominate British crime fiction? With Denise Mina at least, the answer is pure class DAILY TELEGRAPH One of Denise Mina's many attractions is her willingness to take risks with her characters. She delves deeper than most into emotions, whether of the police, victims or perpetrators; she eschews the usual formula of crime fiction…The financial and moral disintregration of families, the iniquities of the class system and prostitution all play a role. Mina's best THE TIMES The writing is as sharp as a Stanley knife. — Brandon Robshaw The Independent on Sunday Thoughful attention to detail take the novel to another level…Scotland has produced some seriously good crime writers; The End of the Wasp Season places Denise Mina alongside Ian Rankin and Val McDermid FINANCIAL TIMES Miss your bus stop…reading The End of the Wasp Season by Denise Mina, a gripping tale tracing the links between an elite private school, the suicide of a millionaire banker and the shocking murder of a wealthy young woman GRAZIA Cleverly breaks down everything you once thought you knew about crime novels WEIGHT WATCHERS MAGAZINE Denise Mina is one of Scotland's most impressive crime writers. This dark, angry novel doesn't offer easy thrills or the intellectual diversion of a whodunnit. Instead it focusses on its deeply flawed characters, their motivations and the world they live in … undeniably powerful SPECTATOR

Denise Mina is a critically acclaimed Glaswegian crime writer. Her novels includeThe End of the Wasp Season and Gods and Beasts, both of which won the prestigious Theakstons Old Peculiar Crime Novel of the Year Award in consecutive years. Denise also writes short stories and in 2006 wrote her first play. She is a regular contributor to TV and radio. Find out more at www.denisemina.co.uk or follow her on Twitter @DameDeniseMina