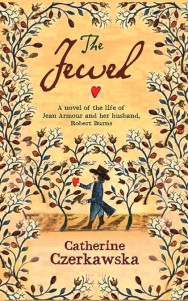 Home > Fiction from Scotland > The Jewel

A Luscious Historical Novel About Robert Burns’ wife, Jean Armour. The Jewel is set largely during the dramatic years of their courtship in Mauchline, their married life at Ellisland and in Dumfries, and Robert’s early death, all against a background simmering with political intrigue and turmoil. Jean – a beautiful young woman with the voice of a nightingale – has been inexplicably neglected by biographers and historians. At first, her stonemason father tried to protect the young Jean from the advances of the mercurial ploughman-poet, whose roving eye and even delusions of grandeur were notorious. Nevertheless, she fell for him and accepted his proposal. Their extraordinary marriage was passionate, tempestuous, and enduring against all odds, and its rocky course reveals Jean’s indomitable strength and character. How she lived with, and frequently without, Scotland’s most famous son tells us much about the life and times of Burns himself, and is a compelling story in itself.

Catherine Czerkawska is a multi-award-winning novelist and playwright based in Scotland. She has written plays for the stage, ITV and BBC Radio 4, and has published numerous short stories. Her eight novels include The Curiosity Cabinet, shortlisted for the Dundee International Book Prize and serialised on BBC radio in 2013.