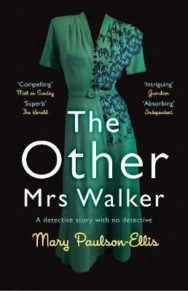 Home > Fiction from Scotland > The Other Mrs Walker

The Other Mrs Walker is the beguiling debut from Mary Paulson-Ellis, for fans of Kate Atkinson and Sarah Waters.Somehow she’d always known that she would end like this. In a small square room, in a small square flat. In a small square box, perhaps. Cardboard, with a sticker on the outside. And a name . . .An old lady dies alone and unheeded in a cold Edinburgh flat on a snowy Christmas night. A faded emerald dress hangs in her wardrobe; a spilt glass of whisky pools on the floor.A few days later a middle-aged woman arrives back in the city she thought she’d left behind, her future uncertain, her past in tatters.She soon finds herself a job at the Office for Lost People, tracking down the families of those who have died neglected and alone.But what Margaret Penny cannot yet know, is just how entangled her own life will become in the death of one lonely stranger . . .

Reviews of The Other Mrs Walker

A wonderful, inventive debut with an intricate and intriguing structure, characters that fascinate and a beady authorial eye for detail. I can't wait to see what this author has up her sleeve next. — Fanny Blake * Daily Mail * A very impressive debut . . . Flinted with shards of black humour, The Other Mrs Walker is refreshingly inventive crime fiction * Irish Times * Paulson-Ellis has been compared to Kate Atkinson for her time-shifting debut, a structure which, it has to be said, is handled impressively well here . . . She captures the greyness of an Edinburgh winter superbly well; she portrays the desperation and colourlessness of pre and post-war London even better . . . One of the strongest debuts of the year * Glasgow Herald * The beauty of this book is in the writing style and delicate plot . . . It reminded me of Kate Atkinson, particularly her Jackson Brodie novels – part mystery, part family drama and lots of just brilliant observation . . . Thoroughly enjoyable and highly recommended * Nudge * This compelling story, set from 1921 to 2011, reveals the secrets of a group of women whose pasts are strangely connected. * Mail on Sunday * Intriguing and atmospheric * Guardian *

Mary Paulson-Ellis lives in Edinburgh. She has an MLitt in Creative Writing from the University of Glasgow and was awarded the inaugural Curtis Brown Prize for Fiction in 2009 and the Maverick Award from the Tom McGrath Trust in 2011. Her short stories and non-fiction have been published in a variety of anthologies and magazines including New Writing Scotland, Gutter and the Herald. The Other Mrs Walker is her debut novel.