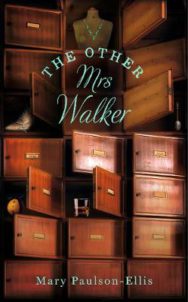 Home > Fiction from Scotland > The Other Mrs Walker

The Other Mrs Walker is the beguiling debut from Mary Paulson-Ellis, for fans of Kate Atkinson and Sarah Waters. Somehow she’d always known that she would end like this. In a small square room, in a small square flat. In a small square box, perhaps. Cardboard, with a sticker on the outside. And a name …In a freezing, desolate Edinburgh flat an old woman takes her last breath surrounded by the few objects she has accrued over a lifetime: an emerald dress, a brazil nut engraved with the ten commandments – and six orange pips sucked dry. Meanwhile, guided by the flip of a coin, Margaret Penny arrives back at her old family home, escaping a life in London recently turned to ash. Faced with relying on a resentful mother she has never really known, Margaret soon finds herself employed by the Office for Lost People, tasked with finding the families of the dead: the neglected, the abandoned, the lost. Her instructions are to uncover paperwork, yet the only thing Mrs Walker, the old woman in her current case, left behind is a series of peculiar objects.But in the end it is these objects that will unravel Mrs Walker’s real story: a story rooted in the London grime and moving from the 1930s to the present day, a story of children abandoned and lost, of beguiling sisters and misplaced mothers, of deception and thievery, family secrets and the very deepest of betrayals; in which the extraordinary circular nature of life will glitter from the page. For in uncovering the astonishing tale of an old woman who died alone, Margaret will finally discover her own story too …

Reviews of The Other Mrs Walker

The beauty of this book is in the writing style and delicate plot … It reminded me of Kate Atkinson, particularly her Jackson Brodie novels – part mystery, part family drama and lots of just brilliant observation … Thoroughly enjoyable and highly recommended Nudge An impressive debut … Flinted with shards of black humour, The Other Mrs Walker is refreshingly inventive crime fiction as Margaret gradually uncovers the truth "of children born and died. Of madwomen dragged out into the street. Of a mother who had tried in her own way to keep her daughter safe." Irish Times This compelling story, set from 1921 to 2011, reveals the secrets of a group of women whose pasts are strangely connected. Mail on Sunday Paulson-Ellis has been compared to Kate Atkinson for her time-shifting debut, a structure which, it has to be said, is handled impressively well here … She captures the greyness of an Edinburgh winter superbly well; she portrays the desperation and colourlessness of pre and post-war London even better … One of the strongest debuts of the year Glasgow Herald A wonderful, inventive debut with an intricate and intriguing structure, characters that fascinate and a beady authorial eye for detail. I can't wait to see what this author has up her sleeve next. — Fanny Blake Daily Mail Intriguing and atmospheric Guardian

Mary Paulson-Ellis lives in Edinburgh. She has an MLitt in Creative Writing from the University of Glasgow and was awarded the inaugural Curtis Brown Prize for Fiction in 2009 and the Maverick Award from the Tom McGrath Trust in 2011. Her short stories and non-fiction have been published in a variety of anthologies and magazines including New Writing Scotland, Gutter and the Herald. The Other Mrs Walker is her debut novel.