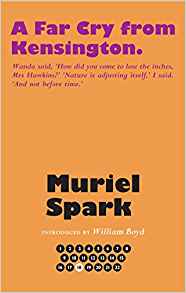 After young publishing assistant and war widow Mrs Hawkins crosses swords with writer Hector Bartlett the repercussions are swift. Set in postwar literary London, A Far Cry from Kensington is a mischievous and stylish tale of the cost of telling the truth.

The introduction is by William Boyd, educated at Glasgow University and Jesus College, Oxford. His novels include A Good Man in Africa (1981), Any Human Heart (2002), Restless (2006), Ordinary Thunderstorms (2009) and Waiting for Sunrise (2012). He has worked extensively as a film and television screenwriter, often adapting his own work.