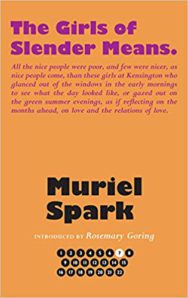 The Girls of Slender Means

London, 1945. The girls of slender means are the residents of the May of Teck Club, a genteel yet rather shabby boarding house established for the ‘social protection of ladies of slender means below the age of thirty years’. The novel concerns their everyday affairs over a period of a few weeks before a shocking event transforms their lives.

The introduction is by Rosemary Goring, who was literary editor of Scotland on Sunday, The Herald and the Sunday Herald. In 2007 she published Scotland: The Autobiography, which has since been published in America and Russia. She is also the author of two novels, After Flodden and Dacre’s War.