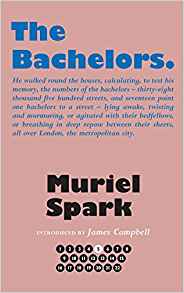 Spiritualist and extortionist Patrick Seton is coming up for trial. He’s been accused of forgery, and suddenly West London’s bachelors are all in a tizzy. Described by Evelyn Waugh as the ‘cleverest and most elegant of all Mrs Spark’s clever and elegant books’, The Bachelors is a biting comedy of English manners.

The introduction is by Glasgow born James Campbell, who was educated at at the University of Edinburgh. Campbellis a former editor of the New Edinburgh Review, writes for the Times Literary Supplement and the Guardian, and is the author of several books including This Is the Beat Generation and Syncopation.