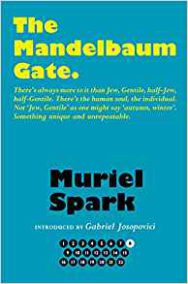 While on a pilgrimage to the Holy Land, English teacher Barbara Vaughan becomes intent on joining her archaeologist fiancé Harry, who is working on the site of the Dead Sea Scrolls. Ignoring warnings not to cross the Mandelbaum Gate – the boundary between Israel and Jordan and the division between an old land and a new land – she enlists the assistance of British diplomat Freddy Hamilton and Arab contacts. An exotic and extravagant tale of abduction, espionage and pilgrimage.

The introduction is by Gabriel Josipovici. Born in Nice in 1940, Josipovici has written over a dozen novels, starting in 1968 with The Inventory. He has also published several collections of short stories and a number of books of non-fiction. His plays have been widely performed on the stage and on radio and his work has been translated into the major European languages and Arabic.