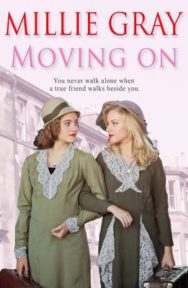 Home > Fiction from Scotland > Moving On

‘Moving On’ continues to follow the Anderson family as they strive to wrestle with the ups and downs of life in peacetime Britain.The church bells had just finished joyously ringing out to celebrate the end of ‘World War Two’ in May 1945 when Johnny realises that he must speedily prepare himself for a life in politics. All, however, is not plain sailing as he has to accept that the Labour candidacy for the parliamentary seat of industrial Leith has been offered to one James Hoy. Nonetheless he promises to fight for a fairer society and to serve the constituents of the large new housing developments of the extensive Granton area who vote him into Westminster. He also vows to remain to be a dutiful and loyal husband and father and to keep himself aloof from the murkiness of the Westminster establishment but these vows, unfortunately, prove to be more than problematic.Peacetime it is not for Johnny’s brother-in-law either. The graphic images and stories of the barbaric treatment of the Polish people, especially the Jews, coming out from Europe has refugee Hans question if he has a right to do nothing to help those, especially the children, who have survived.But he also has to consider if he has the right to ask Kate, his newly wed wife, to also accept the obligatory commitments his conscience demands.Meanwhile Johnny’s daughter, from his first marriage – second year probationer nurse Kitty – falls in love with a dashing young Canadian doctor but when he betrays her she vows to devote the rest of her life to the service of others. When her life long friend, Laura, whose brother, Tom, was justifiably convicted for the murder of his faithless wife, prepares to leave for Australia, taking her brother’s daughter with her, she pleads with Kitty to always visit him in Saughton prison. As the years pass, prison visits become the highlight of Kitty’s life but is it prisoner Tom or the prison duty chaplain, Church of Scotland Minister, Steve, that is the attraction?

Millie Gray is a writer and professional storyteller. Her humorous plays attract audiences from all over Scotland and she is much in demand to do workshops and talks about her work. Millie Gray was born and raised in Leith and lives in Edinburgh.