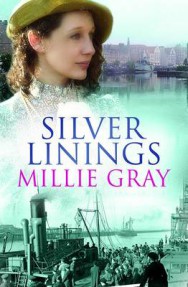 Set in the darkest days of the Second World War, Silver Linings is based in the shipyards of Leith and follows the ups and downs of the Anderson family as they struggle to survive through war, hunger and loss. As the war begins to gather pace in 1940, the unexpected death of Sandra Anderson dramatically and ruthlessly changes forever the lives of the family she leaves behind. Kitty, her spoiled and pampered fifteen-year-Old daughter, has to give up her dreams of a career, as she becomes the family drudge. Sandra’s heartbroken husband, Johnny, finds solace for his grief by becoming the main mouthpiece for his Trade Union in the shipyards, leaving little time for new-born Rosebud, whose birth caused her mother’s death. And to add to what seems insurmountable problems, Kitty and Johnny must try to fulfil the death bed promises they made to Sandra, which makes a nearly impossible situation even worse. With the help of Johnny’s spinster sister Kate and Jenny, his matriarchial mother, they must find a way to survive. When victory in Europe finally arrives, Kitty can see an end to her menial life and Johnny an end to his self-denial.And they also realise that the only way they can free themselves from the lives they hate is to break the solemn promises they made to Sandra on her death bed. But can they really live with the guilt of broken promises?

Millie Gray is a writer and professional storyteller. Her humorous plays attract audiences from all over Scotland and she is much in demand to do workshops and talks about her work. Millie Gray was born and raised in Leith and lives in Edinburgh.