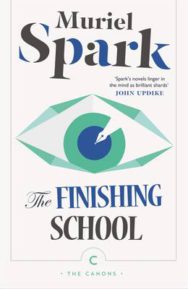 ‘One of her funniest novels . . . Spark at her sharpest, her purest and her most merciful’ ALI SMITHIn The Finishing School Muriel Spark is once again at her biting, satirical best. On the edge of Lake Geneva in Switzerland, a struggling would-be novelist and his wife run a finishing school of questionable reputation to keep the funds flowing. When a seventeen-year-old student’s writing career begins to show great promise, tensions run high. A keen portrait of devouring regret, psychological unravelling and the glittering promise of youth, The Finishing School is the perfect natural partner to Muriel Spark’s most famous novel The Prime of Miss Jean Brodie.

Reviews of The Finishing School

An eloquent, subtle, poetic exploration of what words are and what they do to us. Enchanting, devastating, genius

Muriel Spark, DBE, C.Litt., was born in Edinburgh in 1918 and educated in Scotland. A poet and novelist, she is most well known for The Prime of Miss Jean Brodie. She also wrote children’s books, radio plays, the comedy Doctors of Philosophy and biographies of nineteenth-century literary figures, including Mary Shelley and Emily Bronte. Muriel Spark has garnered international praise and many awards, including the David Cohen Prize for Literature, the Ingersoll T.S. Eliot Award, the James Tait Black Memorial Prize, the Boccaccio Prize for European Literature, the Gold Pen Award, the first Enlightenment Award and the Italia Prize for dramatic radio. She died in 2006.