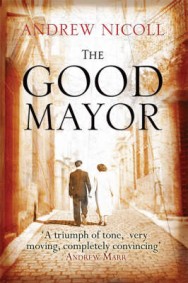 “The Good Mayor” is a magical debut novel. It is a love story and a story about love.Set in the little town of Dot in a forgotten part of the Baltic, it tells the story of Tibo Krovic, the good and honest Mayor of Dot, and his love for his secretary, the beautiful, lonely, but married, Mrs Agathe Stopak.In the quiet, respectable town of Dot, there is nothing that Tibo can do about his love for Mrs Stopak but, one day when she accidentally drops her lunch in a fountain, everything changes and their lives will never be the same again.”The Good Mayor” contains love, loss, magic, friendship, wonderful food, a brass band, an Italian witch, a large lawyer, an occasional dog and a car chase that takes place at walking pace.”The Good Mayor” is one of the best and most exciting debut novels in years and Andrew Nicoll is destined to become a major voice in UK literature.Read “The Good Mayor” and fall in love again.

Reviews of The Good Mayor

"'A TRIUMPH OF TONE, VERY MOVING, COMPLETELY CONVINCING' – Andrew Marr of The Andrew Marr Show and Start the Week."

After a brief stint as a lumberjack, Andrew Nicoll has spent his working life as a newspaper journalist. He has had short stories published in New Writing Scotland and other magazines. Andrew is 45 and married with three children.