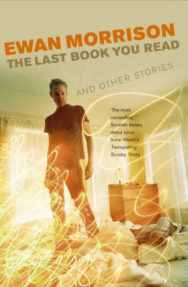 Home > Fiction from Scotland > The Last Book You Read

The Last Book You Read

The four things you can?t live without: air, water,shelter, sleep. More questions. The last book you read: none Sexual preferences: I hesitated on that one. An internet blind date; a fuck buddy; a man who is writing a book called The Adulterer?s Guide; a couple venturing out on their first foursome; a man waiting to see his children again after a divorce; a woman planning to seduce a friend?s husband. Frank, witty, disturbing and ultimately compassionate, The Last Book You Read marks the debut of a powerful new voice. These stories tell of people caught between places and lovers, between the USA and Scotland, between desire, addiction and regret. From this collection emerges a singular picture of modern-day relationships, their conflicts and passions. Male or female; gay or straight; young or old; married, single or divorced – the difficult loves of the contemporary urban world are charted with clarity and assurance.

Ewan Morrison graduated with a degree in Fine Art from the Glasgow School of Art. Throughout the ’90s, he worked in television, writing, producing and directing over 200 hours of arts and entertainment programming for Channel 4, BBC and STV. More recently, he has branched out into television and corporate advertising. These stories are the first Ewan has had published. He is currently working on a novel.