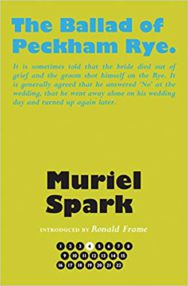 The Ballad of Peckham Rye

A bewitching comic masterpiece, The Ballad of Peckham Rye relates the tale of one Dougal Douglas, who is taken on by a small textile firm to ‘bring vision into the lives of the workers’. A devilishly charismatic force of nature who likes nothing better than to stir things up, he takes great delight in wreaking havoc with the locals. Nervous breakdowns, sexual misdemeanours, a heart attack and murder ensue . . . This is Spark at her most ingenious.

The introduction is by Ronald Frame, who was born in Glasgow in 1953, and educated there and at Oxford. He is the author of many works of fiction, including the Booker-longlisted The Lantern Bearers, and is an award-winning television and radio scriptwriter.